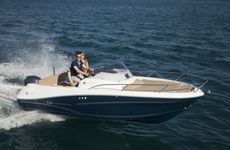 Jeanneau Cap Camarat 6.5WA Serie 2
No matter what her dimensions may be, each new Cap Camarat WA has always offered increased comfort on board.

The new Cap Camarat 6.5 WA serie 2 does not deviate from this rule, and it features a superb design, directly inspired by that of the Cap Camarat 7.5 WA.

With a robust, redesigned hull line, a sculpted console and an enhanced dashboard, the overall style is strengthened by design elements from the largest Cap Camarat.

In the late 1960’s, pleasure cruising sailboats became mainstream, and shipyards like Jeanneau would produce their first sailboats to benefit from this new enthusiasm for sailing. Technological innovations lowered production and purchasing costs, and pleasure cruising became accessible to the masses. The celebrated Glénans sailing school found its stride in this same period. It was the end of the age of the aristocratic sailor, and sailboat production exploded with the fabulous Sangria, a model launched by Jeanneau in 1970 that sold over 2,700 boats. This formidable success cemented Jeanneau’s place at the forefront of the marine industry in the design and construction of cruising sailboats.
ID: 17750